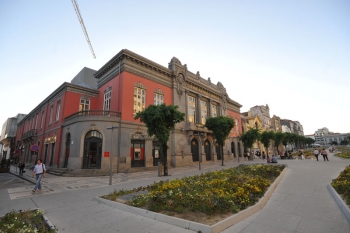 The Municipality of Braga believes that cultural promotion is essential to highlight Braga's position at regional and international levels. In that sense, the intervention strategy adopted in this field includes the promotion of various projects and initiatives founded on increasingly solid institutional synergies and on a progressive investment in cultural facilities, revealing a City with a diversified and appealing Cultural Program.

Also essential for this Municipality is to ensure the preservation and appreciation of our History and our Heritage, so this aspect of heritage safeguarding and promotion is considered in its initiatives, particularly in Braga's Organ Festival, in "Baroque" Braga, in "Discovering Braga" Programme (“À Descoberta de Braga"), in the revitalization of Saint John's Festivities, in initiatives to support the application of Bom Jesus do Monte to World Heritage or in initiatives to support the publication of books about Braga. The Municipality is in process of creating an exhibition on the history of the city, by creating a museum centre about the city, an integrated project to access the Museums and the applications of the Holy Week and St. John's festivities to the National Inventory of Intangible Cultural Heritage.

Along with these initiatives, Braga will formally apply to UNESCO’s Creative City, in Media Arts category, an action which counts on the partnership of the entire regional creative ecosystem and which creates opportunities for the development of new initiatives and projects.